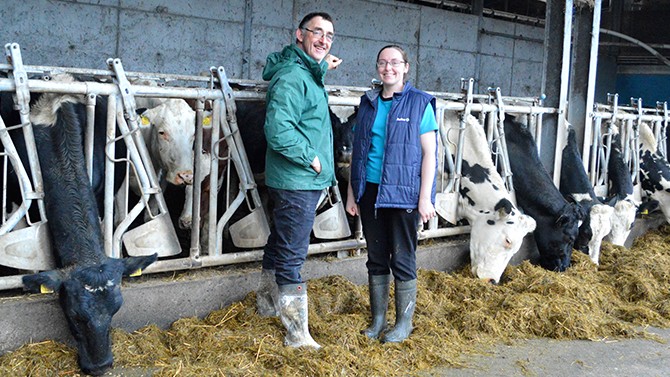 Getting the most from your calves is crucial. We spoke to farmer Cathal Garvey from Co Mayo, about his dairy enterprise, calf management and JFC’s Evolution S2 Automatic Calf Feeder.

Cathal Garvey runs a 120 Holstein Friesian dairy-cow herd, near Headford in South Co Mayo. Cathal has been involved in dairy farming all his life and is a second generation dairy farmer. He farms a land base of 260ac. 75% of the herd are spring calving while the remainder of the herd are calved in the autumn. This means that there is year-round milk production on their farm. Last year, Cathal purchased JFC’s Evolution S2 Automatic Calf Feeder and has seen the following key benefits.

Cathal says that the primary reason for purchasing JFC’s Evolution S2 automatic calf feeder was to reduce the workload during the busy calving period, “Labour can be in short supply during the busy period. Our busiest time of the year is February and March when a large percentage of the herd are calving down. We don’t have the time to mix the milk replacer, feed the calves and make sure they are getting the same amount. We realised that we needed to find a way of reducing the heavy workload. The automatic calf feeder does this for us. The machine also self-washes twice per day.”

“The Evolution S2 can comfortably feed 70 calves. There are two feeding stalls, which means that two calves can be fed at any one time. Once a calf is finished in a feed stall, another is ready to step in.” “We have been trying to constantly grow the herd over the last number of years. In order to do this, we looked at ways of streamlining efficiencies on the farm. The Evolution S2 allows us to do this as the calves are fed four times each day, once the milk replacer is added. Now we can focus on looking after the calves’ performance rather than feeding them. It’s like having a second set of eyes on the calves.”

“Each calf receives the same amount of milk – something you can’t guarantee when you are using teat feeders. This means that I’m giving each calf the best possible chance of performing at their optimum. The best time for live-weight gain is in the early stages of development. The more milk replacer you can get into them the better it will pay you in the long run when it comes to having bigger, healthier calves.” Cathal mentions that the ability to feed calves different amounts in the same pen is a key benefit of the Evolution S2 calf feeder. Cathal said “I need to be able to feed bull calves and heifers differing amounts of milk replacer. Before having the calf feeder I would have had to separate them. Now I can keep them all in the one pen as you can increase or decrease the amount that each calf receives using the machine. “No matter how many times I would have made a batch of milk replacer, I’d never get it to the same temperature and consistency as the previous batch. The calf feeder brings consistency to this. The Evolution S2 takes a huge burden away from us and gives us peace of mind that the calves are getting what they require, and at the right time. The calves are also much more calm and relaxed.”

“It saves me time. If I can be finished that bit earlier in the evenings, it means I can get a break. With the best of intentions, you’d like to be finishing up at a decent hour but in the past it hasn’t really been possible as there’s always so much to do. The calf feeder has allowed me to do this. You want to be able to spend as much time with the family as you can and now that is possible.”

Cathal says that it is a seamless process when it comes to training the calves to use the Evolution S2, “The calves take to the feeder straight away. It doesn’t really take any training. Once they know that they get the milk from the teat there is no stopping them.”

Cathal admits that the daily feed performance reports are a key tool to help identify sick calves in time, so that corrective action can be taken. “You can see what calves are thriving and the ones that are not. If the calf has a green tick beside its ear tag number it means that it is drinking what it should be. A red ‘X’ highlights where a calf hasn’t drank its full quota of milk or if they haven’t drank at all. The first thing a calf will do when it’s not thriving is it will stop drinking altogether or reduce their intake. I can remove the calf from the herd in case it has scour that may contaminate the other calves. It also means that I can easily spot calves and treat them in time so their performance doesn’t suffer.”

In terms of performance, Cathal is quick to point out the noticeable improvement in the quality of his calves. “I’ve had the Evolution S2 for the past year and can see a big difference in the condition of the calves. “They are bigger, healthier and happier. When you see them constantly jumping around in the pens, you know they are thriving. Because the calves have a constant supply of milk mixed correctly and at the right temperature, it means that they will perform at their optimum. “Provided the calves don’t get sick, they are getting the same amount of milk which should mean equal weight gain which in turn means an equal weaning weight. I know that they’re getting what they should be getting.”

Cathal has found working with the team at JFC Agri to be a very professional experience, “When I purchased the Evolution calf feeder last year, the team at JFC were very helpful. They installed the machine to suit my system of calf rearing.” “For what you get, it’s a well-priced product. It significantly reduces the workload, guarantees consistent feeding of all the calves and gives me more time to focus on managing my herd.” “The automatic calf feeder is an ideal addition to any farm. In particular those that are trying to maximise efficiencies and save time where they can. You still have to look after your calf but it certainly means you have more time to concentrate on other areas of the farm.”