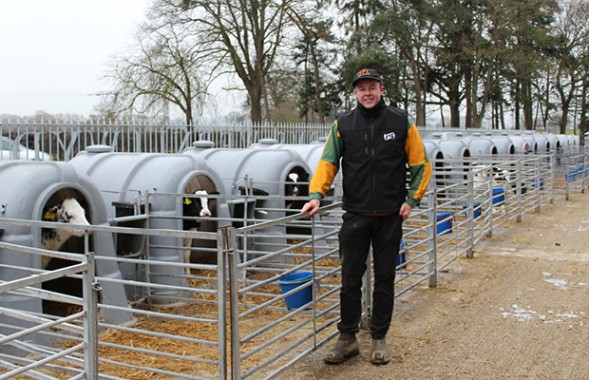 Fraser farms 2,700 head of cattle over 7 different sites covering 2,690 acres. His calf rearing unit is based just south of Welshpool housing 1,300 heifers and calving 30-36 per week.
With so many calves on the ground at once there is a clear plan of how the future of the herd are cared for at Calcourt. Once the calves are born they are transferred to a single hutch based indoors, they remain in the hutch until they have received the full amount of colostrum required. The calves are then moved into single hutches which are outdoors, where they remain for a further 8 weeks. At 8 weeks old the calves are moved into large groups of ten, where they are housed indoors. Fraser has found no issue with moving the calves from single hutches to the larger groups. Whilst in the hutches the calves are under the watchful eye of Fraser’s calf rearing duo who look after the calves on a day to day basis. ‘The calves are fed twice a day by the same person every time, this is essential for the monitoring of calf health,’ comments Fraser.

‘I purchased the JFC calf hutches at least 10 years ago and I am really pleased how they have stood the test of time.  As soon as we moved to hutches my vets bill reduced massively, as the amount of pneumonia and scour cases decreased. The calves are all bedded on straw within the hutch and we purposely don’t bed outside as this allows us to monitor the calf’s faeces, as this is good indication of the health status of the calf.  Once the calves are moved into bigger groups at 8 weeks old the hutches are cleaned and disinfected which is a straight forward job as the hutches are easy to handle.’ With no stone unturned at Calcourt Farms, Fraser ensures there is a place for everything. Following an AI programme of both sexed and conventional semen Fraser ensures all bull calves are reared and sold to a national retailer where they are reared for Rose Veal.

The next steps for Fraser are to commence the milking at the Welshpool super dairy in May, with further expansion plans for the rearing unit.