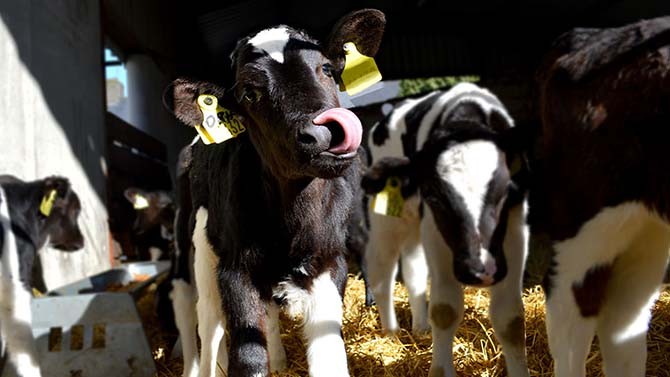 Embracing new technology and innovative management practices is a vital element of modern dairy farming given that the overall workload is increasing in lockstep with the hike in cow numbers.

The rewards of smarter farming strategies are evident from the paddock to the milking parlour, and have also reached into the calf shed.

The Johnstons farm at Lisnaskea, where they milk between 90 and 100 cows throughout the year. The cows calve on a continuous basis, with between 15 and 20 dry at any one time while the remainder are in milk.

The herd is primarily Danish Jerseys, the majority of which are bred to Belgian Blue sires. However, some of the best heifers are put in calf to Jerseys for replacements.

There is a ready market for the Belgian Blue crosses, which are generally sold in local marts at around a month old. However, the Johnston’s system means that rearing young calves is a continuous task on the farm – seven days a week, 12 months of the year.

The purchase of the JFC Evolution automatic calf feeder was a reflection of the time and labour committed to rearing calves every day.

Steven estimates that 1.5 hours each day was spent feeding calves between himself and his father George.

“Since we installed the automatic calf feeder, we’ve the calves fed in 15 minutes. We still check the calves twice a day, so the overall saving is around an hour a day,” Steven says.

This is a major time saving on a busy dairy farm. It totals seven hours over the week, which is almost an average working day outside of farming.

However, saving time was not the only consideration when the Johnstons decided to install the automatic calf feeder. They were also looking for a simple, user-friendly system that delivered strong healthy calves on a consistent basis.

The JFC Agri Evolution has delivered on both fronts, with the simplicity of the technology matched by the after-sale service, and the quality of calves that are ready for the mart every four to five weeks.

While the Johnstons are certainly not afraid of technology – the family recently installed a robotic milking system, and the farm is operated as a zero-grazing unit – Steven believes the user-friendly nature of the JFC Agri Evolution S2 is one of its great advantages and selling points.

“The feeder is very simple to operate. My father is 83 and he has had no problem mastering it,” Steven explains.

The Johnstons usually have between 10 and 20 calves at a time being reared on the feeder, but Steven has fed up to 27 on occasion.

“However, this is not the capacity of the feeder. It could easily take 35-40 calves per stall, or 70-80 calves per machine. But I just never had that many calves.”

The JFC Agri Evolution unit on the Johnston’s farm has two stalls, which enables two calves to be fed at a time. The calves are individually recognised by the machine by way of RFID Tags and are automatically fed three times a day – usually around 2 litres per feed.

The ease with which the calves adapt to the feeder has also been a major plus of the JFC Agri Evolution unit.

“The calves are all going by the second feed. I think I have had to work with just three calves since I put in the automatic feeder,” he maintains.

“You have to get the calf going the first time, but by the second feed they are generally going themselves. The calves then get into a rhythm of feeding every eight hours or so.”

An added benefit of the JFC Agri Evolution is the manner in which the control unit flags up any calves that have not fed or have not taken their full feed.

The control unit, which comes with an innovative touch-screen display, highlights the calves that have yet to complete their feed with an amber mark. Calves that have not fed are marked in red.

JFC Agri also offers a downloadable mobile phone app, which Steven uses to monitor the calves. This allows the operator to remotely check the calf feeder data on an ongoing basis.

Steven says this facility has been a really useful indicator of calf performance; in essence, it is a virtual early warning system for the farmer.

“For example, you can look up the milk intakes for each calf on the app. If you have a calf that is sick, it’s obviously going to be drinking, so you know immediately that you have a problem,” Steven explains.

Weaning calves is also simpler with the JFC Agri Evolution.

“It is a very smooth process when we’re weaning the replacement heifer calves. We just gradually reduce the feeding setting on the JFC Agri Evolution over the last 10 days of milk feeding. By the last two or three days the calves are just getting a very small drop of milk and have naturally moved over to eating more nuts and hay. They are weaned off milk with the minimum of stress,” Steven maintains.

He adds a bag of milk replacer every two to three days – the unit comes with a single mixing bowl and hopper – and after that it’s a primarily a monitoring role.

Steven has also been impressed with the after-sale service offered by JFC Agri. The Fermanagh farmer purchased the automatic calf feeder directly from the firm, with JFC Agri’s sales manager for Northern Ireland, James McGrath, handling the transaction.

The fact that JFC Agri Evolution is manufactured at the firm’s Tuam, Co Galway facility – and the quick response time in terms of service that the company is therefore able to guarantee – offers a level of reassurance to farmers.

“I have had very few problems with the feeder,” Steven admits.

“But any slight problems I did have were sorted out over the phone by the service people manning the help desk,” he explains.

“Where I did have to get someone, there was a service technician out within hours,” Steven insists.

Most importantly, the benefits and rewards of the JFC Agri Evolution have been evident in the quality of the calves produced by the Johnstons.

While rearing calves on a continuous basis is a significant challenge, the consistency of the feeding system provided by the JFC Agri Evolution means that there is very little variation in the feed intakes of the calves or in feed quality.

The strong platform this provides for the calves is reflected in reduced health issues, and in improved thrive.

“There is a real bloom off the calves, and they are generally very even in terms of size,” Steven maintains.

“I think the feeding system gives them a real boost.”

The fact that there is strong repeat demand for Steven Johnston’s calves is the most important validation of his calf rearing system and, by extension, of the JFC Agri Evolution automatic calf feeder.