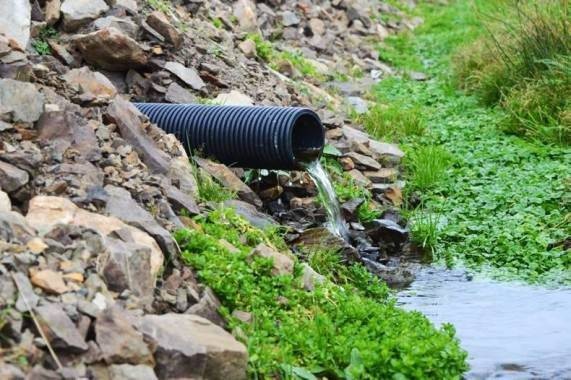 The smooth surface inside a twin wall drainage pipe creates a low risk of silting up, it is claimed.
Twin-wall drainage pipe allows water to flow faster and is therefore more likely to keep itself clean than single-wall, corrugated drainage pipe. So claims Galway firm JFC, which manufactures CorriPipe. The pipe is made by a twin extrusion process, which forms two pipes and heat welds them together as they are formed. The outside wall is corrugated but the inside one smooth.

“This smooth internal wall ensures there is no build-up of silt or solids – they are washed down the pipe,” says David Curley, CorriPipe sales manager. “Studies have shown that you need a velocity of 0.5m/second to ensure that the pipe will clear itself of silt. JFC’s 4in Corripipe laid at a gradient of 1:100 will generate a flow rate of 0.75m/second and will carry over six litres of water per second, which is important during heavy downpours.”

In contrast, 4in single-wall, corrugated land drainage coil pipe laid perfectly even along the bottom of a trench at the same gradient will generate a maximum flow rate of only 0.55m/second and will carry just 4.6 litres of water per second, he claims.

“At the same gradient, a 3in single-wall coil will generate a flow rate of just 0.48m/sec and carry just 2.15 ltrs of water/second. This obviously makes the single-wall coil more prone to silting up.” These calculations are based on Manning’s equation for calculating gravity flow in open channels, Curley says. “In addition, because the twin-wall pipe is rigid, it lies level on the floor of the trench.”

JFC makes the twin-wall pipe in sizes ranging from 4in to 41in (110mm to 1050mm). Contact us today to locate your nearest stockist.