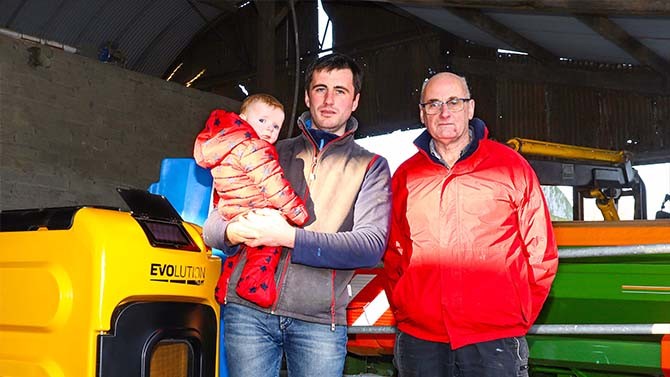 Philip Tyndall farms in a dairy partnership with his parents Anne and John at Ashgrove House, Gurteen, Templeshambo, near Enniscorthy. The Tyndall family milk a spring-calving herd of 140 high-EBI Friesian cows with some crossbreds and supply Glanbia Co-op.

Philip studied dairy herd management at the Teagasc Agricultural College in Kildalton. He is an active member of both Macra and the Irish Farmers’ Association (IFA) as well as their local Teagasc Discussion Group and the IFJ Grass Group.

He is active on social media and has over 5,000 followers on Twitter. The Tyndall Teagasc advisor is Martin Doyle based in Enniscorthy.

The Tyndall farm has been used as a heifer rearing programme monitor farm by Glanbia and for calf rearing events by Animal Health Ireland and Teagasc in conjunction with Glanbia. Average milk yield is a very respectable 540kg of milk solids at around 6,300L/annum. ‘Saving Lots Of Time Every Day’

Incidentally, the national average in 2018 was only 5,438L and 407kg of milk solids per cow. Next year they plan to increase cow number by another 10 cows so this is one busy farm at calving time.

Prior to 2020 the calves were batch fed with a number of 10 teat portable units. This was quite a laborious and time-consuming operation at the busiest time of the year.

Rearing their calves was very laborious and time consuming during 2019. Philip and his father do all the calf rearing so they looked at potential feeding options to reduce the labour and time required.

“We looked at the various calf feeding systems on the market and were most impressed by the S2 Evolution calf feeder from JFC AGRI.” In fact, their local agent for JFC AGRI was Ciaran O’Toole from Keadeen Dairy Services who is based at Barraderry near Kiltegan. Ciaran has been installing and servicing dairy and slurry equipment since 2007 so he is very familiar with the requirements of dairy farmers.

“The hopper is easy to load and the traffic light system warns us if any calf is missing its feed so we can check up on them,” said Philip.

He went on to say: “However, we had very few calves off their feed last spring and were delighted how well they grew and how easy it was to wean them. Now it takes around one hour a day to look after our calves so my father and I are saving lots of time every day.”

The calf rearing procedure on this farm is as follows: First all calves get two feeds of colostrum and transition milk for five days. They are then brought on a trolley to the calf shed where they are bedded on straw.

Calves wear EID tags which can be read by the computer and their age of say seven days is inputted on the screen. They start off on 4L of milk replacer per day which is gradually increased by the computer to 6L/day.

The bull calves are sold direct to other farmers or at Carnew Mart at around three weeks-of-age. In addition, the calves receive a palatable coarse calf mix and barley straw to eat.

Later on the heifer calves move on to calf nuts and are weaned at 70 days. For 10 days before weaning, the computer automatically reduces their milk intake to encourage the calves to eat more solid food.

“The technical support and service for Keadeen Dairy Services is 24/7 and first class,” said Philip. He went on to say that “we had a technical problem on a Sunday morning and Ciaran was over here very quickly to sort it out”. “If we ever have any query about adding calves or changing the feeding curves on the computer he is only a phone call away. So it is a great service indeed.”

According to Ciaran O’Toole the Evolution calf feeder from JFC AGRI is “the most user friendly machine on the market”.

“It is easy to change settings and the calves do really well. One of my customers has an 80-year-old Dad and he has no problems working the machine.” Ciaran went on to say that it was “good practice to clean the feeding station every day”.

“A farmer can expect to use three to four teats per feeding station during the season,” he stated.

Teats are inexpensive and we always give our customers extra teats. Each feeding station has its own pump so the milk is always immediately available to the calves.

According to James McGrath, the Evolution sales manager, their calf feeding system is the best on the market, it is competitively priced and manufactured in Tuam. Sales have been excellent and “we have a team of six service engineers available to look after our Irish customers”.

“Most queries can be sorted out by our 24/7 technical support phone service but, if required, our experienced and well-trained service engineers are only a short drive away from most of our customers,” said James.

The Evolution calf feeder is available in two models, the Evolution S2 and Evolution S4 automatically feed up to 70 and 140 calves respectively. The farmer can simply register each calf on the control unit using RFID ear tags and assign them to a predefined feed curve relative to their nutritional needs and rearing objectives.

Individual feeds are automatically dispensed, and the system ensures no calf exceeds their allocated amount. The machine has a pre-programmed wash cycle to cater for your requirements.

Each calf’s feed performance is consistently monitored on a touch screen display and this information is also available anytime, anywhere via the JFC AGRI Evolution Online App or Web Portal.

James also points out that their “calf feeder is the only machine on the market with two feed hoppers so you can feed the calves on two different milk powders”.

Discover what farmers are saying about their experience with the JFC Evolution in the video (below).